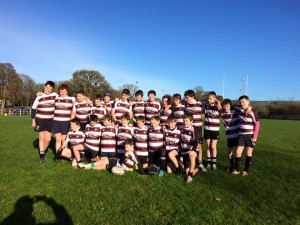 Ballina-Killaloe U13’s took on a strong Thomond RFC in Clarisford Park. Thomond managed to open the scoring with an intelligent kick out to the wing from inside their 22, where their speedy winger managed to secure the ball and spint down the line, avoiding a couple of tackles to dot down for the first try. Ballina-Killaloe regrouped quickly and after a good break to go close, some close in driving saw BKRFC score. Immediately from the kick off, BKRFC ran the ball straight back to record another score. Thomond were not finshed yet and responded themselves with some good handling and quick pace to round the BKRFC defence and score under the posts, with the conversion added Thomond lead 12-10. Once again BKRFC regrouped and with a pick and drive from Evan Wood at a close-in scrum saw BKRFC regain the lead 17-12 at the break.

BKRFC started the second half strongly with some direct running from Kian Donnelly, Ruadhan Quinn and Evan Wood, with James Frahill at 10 and Ian Larkin at 12 and Keelan Hartigan at 13 directing the play, the lead was extended through some excellent team tries.
Credit must go to Thomond who never gave up and managed the final score of the game with a try of their own. The final score ending up 39-17 to BKRFC for their 2nd win of the League.
Well done to all the boys from both teams and to the parents and coaches on the sidelines on what was a lovely autumnal morning in Clarisford Park.